I wonder how many of us actually have any idea why tomorrow, the last Monday in May, is a national holiday? Has this day become nothing more than a tradition of grilling in the back yard?

My father-in-law put flowers on his wife's grave today. There's nothing wrong with that at all, but that's not what this holiday is all about.

May God bless those that have sacrificed for the rest of us. For without them, we would not be free today.
Posted by trajectory at 5:07 PM No comments:

With the daily rain and household chores, I'm ashamed to admit that my new Bulldog 44 is still a virgin. Hopefully that will be remedied this weekend.
Posted by trajectory at 7:26 PM No comments:

In about 2 weeks the Boss and I will be celebrating our wedding anniversary, out of state. We both need a break from our normal stressful life. We'll be traveling through Indiana (gun friendly), and spending time in Iowa (so-so) and Illinois (gun unfriendly). Since I refuse to travel unarmed, guess I'll be breaking a few laws.

It's hard to realize that we will have been married 40 years. It's been a lot better life with her in it. I can't even imagine living without her. She's truly an angel for putting up with me all these years.
Posted by trajectory at 7:17 PM No comments:

The ATF, among other agencies, have been out of control for years. You can read about the latest here and here. So what does one Senator want to do? Give the ATF even more power. What a dick-head.
Posted by trajectory at 8:00 PM No comments:

Here in Ohio the house and senate have passed similar but not identical bills that would make it legal for those licensed to carry in restaurants that serve alcohol. Once they get the differences ironed out, the governor might sign it. It's hard to predict that guy concerning firearm rights.

I really don't understand the opposition. Yeah, guns and alcohol doesn't mix. It hasn't been a problem in Kentucky, or Indiana. Hell, Indiana doesn't care about carrying in bars, just don't drink.
Posted by trajectory at 7:50 PM No comments:

Last week I had a job interview in the afternoon, following a prostate ultrasound that morning. I've been getting it up the ass the last few years by the government. I'm getting used to it. Not one of my best days, especially since I haven't heard a thing from the company where I interviewed.

I had another interview this week, a different company, where I was tag-teamed by 5 people sequentially. By the time I got to number 3 I was completely bored out of my mind. How many times is a guy expected to answer the same questions?

In both cases my background meets about 80% of their requirements. In years past that would be enough to get an offer from at least one of them if not both. Not today! I don't expect to hear back from either. Thank you Fed. government for screwing up our economy.

So I'll continue to be a temporary employee, through an agency, with no benefits. I've been temporary for 16 months now. Right now I'm paying COBRA more than a weeks pay every month for health insurance. That will end in 2 months, because my eligibility runs out. Thanks again Fed. government for screwing up my life. Well at least I have a job.

Speaking of the Fed., they've been anything but honest. No surprise there. If they were figuring unemployment and inflation like back in the Carter era, our unemployment would be around 15% with a 10% inflation rate. Lying bastards.

There's also a rumor that the money juggling to get us past the debt ceiling is at least partially stealing money from federal employee's retirement fund. Nothing new there either. They've been stealing social security money for decades.
Posted by trajectory at 7:27 PM No comments:

While painting one of the walls the Boss and I very briefly talked some politics. I voiced my opinion that Obama would get re-elected next year mostly because I don't see a Republican out there that is as good a "snake oil salesman", and that the majority of voters are sucking at the teat of the government. She said that the public isn't so stupid as to elect him again.

I disagree with her. I think most are too lazy to get informed, don't want their "free" money cut, and are basically socialist at heart as long as they're the receiver and not the giver. They don't want to be self-sufficient. They want someone else to solve everything.
- - - -

Last Friday morning I met an industrial recruiter for coffee. During the conversation he mentioned that each and every engineer he's come in contact with analyzes everything. I was thinking, but did not say, "that's why most engineers are conservatives and vote for Republicans".
- - - -

I'm constantly amazed at the ignorance and stupidity of the American people. Don't they realize that a politician is misleading every time the tongue is wagged? How many actually believed Obama when he said the southern border fence is almost complete, and that border security has improved? That guy must know that whatever says, the public swallows hook-line-and sinker.
Posted by trajectory at 1:48 PM No comments:

Got my new/replacement 44 bulldog a week ago, and it's still a virgin. And the trigger is just as bad as the first one.
The Boss has me repainting the master bedroom suite.
Her priorities could use some adjustment I think.
Posted by trajectory at 1:44 PM No comments:

On a bumper sticker I saw recently.

I thought it was humorous anyway.
Posted by trajectory at 1:42 PM No comments:

Yesterday was not one of my better days. Stress tends to wear a person out, even if only mental.

A couple of weeks ago my yearly blood test showed my TSA(?) number doubled since last year. Typically this would indicate enlarged , infected or cancerous prostate. Yesterday I went for a prostate ultrasound. Having a probe stuck my butt is humiliating at best.

Then later in the day I spent 2-1/2 hours being grilled in a job interview.

Both in one day kicked my butt.

The goo news is that the doc. didn't find anything with the ultrasound, but I'm awaiting the computer analysis.
Posted by trajectory at 7:00 PM No comments:

No Celebration For Me

It took what seemed forever before they finally got him. I sometimes wonder if they really made that big of an effort, but it doesn't matter now. But why such a big celebration? Do you celebrate when putting down a mad dog? Do you celebrate when you know there's another mad dog right behind the first, or tak a breath and get back to business?
Posted by trajectory at 10:26 PM 1 comment:

I finally got to try out my new hip on a paintball field today. The grandson and I participated in the exchange of gas propelled spheres for about 4 hours today before, you guessed it, the rain came.

The new hip did just fine, but the supporting muscles still have a ways to go before I'm back to normal. I refuse to accept that this is now the new normal. When others ran or jogged, I walked. And even then I sat out a couple of games.

I suppose it was a good thing that the rains came. That was about all the enjoyment I could handle.
Posted by trajectory at 10:18 PM No comments:

In late January my Charter 44 Bulldog was shipped back to Charter because of a cracked forcing cone. Three weeks ago I was told it was repaired and shipped back in late February. The dealer where I purchased it was also my shipping agent, and said it was never received. I have no idea if Charter ever found it, but they sent be a brand-spanking-new revolver.
Posted by trajectory at 10:12 PM No comments: 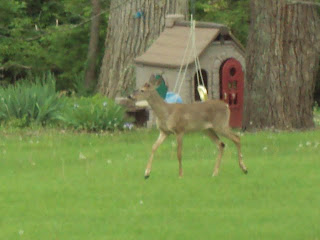 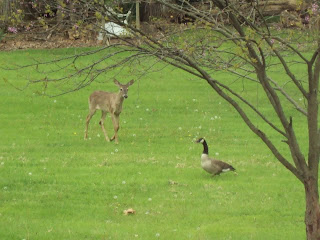 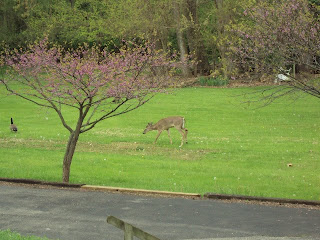 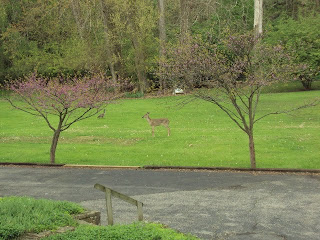 This morning when I was getting ready to leave for the paintball field, I saw these visitors. I took the pictures through the big window overlooking the yard. I've seen the occasional track left by night traveling deer, but this may be the very first daytime sighting. She looks to be 1 year old, and was definitely interested in the geese. She followed them around for quite a while.
Posted by trajectory at 4:29 PM No comments:

I got a new toy in the mail this week. I bought a used electro-pneumatic paintball gun called Promaster. It joins the stable as a back-up to my primary markers that are also electronically controlled but us sears, the Tippman A-5 and Proto SLG. I also own a mechanical blow-back semi-auto, Action Markers Sentinel, a pump action for pump gun only games and a Tippman 98.

The 98 is going in the garage sale so I'll have 5 paintball guns, 4 of which have full auto capability. Is that an arsenal?
Posted by trajectory at 4:37 PM 1 comment:

About 4 weeks ago I was intending to play paintball for the first time in 1-1/2 years. My bad hip kept me off the fields for that long. Now that I have a completely new, man-made hip I was anxious to go shoot up some people. Rain kept me from playing then, and again today. We were planning to drive north of Columbus to a place called Splatterpark for their spring big game. The last time I was there, they had about 800 players involved in a continuous war. The weather is pissing me off.

Instead of shooting paintballs today, the son and I went to the range where we had a roof over our heads and broke some clay pigeons using lead instead of paintballs. That's the first time I've fired a long gun in almost a year. I was using the M44 Negant and carbine modified Ishapore.
Posted by trajectory at 4:01 PM No comments:

trajectory
Formerly of The Beagle Express (beaglexp.com) The rants, ravings and thoughts of a grandfather, engineer, gun and liberty enthusiest. Capitalist: The only system that works. Individualist: Self-responsible & nanny state rejection. Individual Right: Self-defense and the appropriate tool, the first & most important whether against another individual or government.